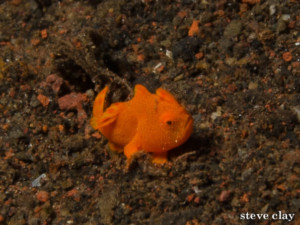 Frogfish – also known as anglerfish – are one of those weird & wonderful underwater inhabitants that divers simply love to discover.

In addition to their superb camouflage, their incredible variety of colour and texture make them fascinating to observe, while their behaviour is equally unusual.

There is a lot of variety within species as well, two frogfish of the same species can have very different markings and colours, making it very difficult to correctly identify many of them.

Behaviour
When frogfish bother to move at all, they tend to walk, rather than swim. When they do move then often walk on modified fins as legs. They can swim but rarely do so unless escaping danger or mating.

Diet
They fish – with a lure on the top of their head – rather than actively hunt, and their down turned mouths and unusual body shape add to a real sense of character. Frogfish eat a variety of fish and crustaceans. Their bones are extremely flexible, allowing them to swallow a fish up to twice their own size. They have even been known to eat each other. Although they will happily eat almost any fish they can catch, different species have specific favourites, their lures each mimicking a different appealing snack for passing fish.

Size
There are around 45 members of the highly specialised frogfish family. All frogfish are a similar shape but can vary greatly in size colouration, patterns and markings. Full grown frogfish vary from the New Ginean frogfish (Antennatus dorehensis) only 5cm to the Giant frogfish (Antennarius commersoni) that can reach 50cm.

Reproduction
As she becomes ready to mate the female starts producing eggs. As her abdomen swells, she becomes larger & more buoyant, attracting the attention of nearby males. As her buoyancy increases the male starts to nudge her repeatedly until both float to the surface where the eggs are released and fertilised, forming a floating gelatinous raft. This raft is usually left to float pelagically, however some species attach the eggs to their bodies and guard them until they hatch. Juvenile frogfish are pelagic for about 2 months once hatched, after which they settle on a reef.

Defences
The best defence a frogfish has is its camouflage. Not only is it essential for catching prey, it also helps baffle would be predators. Most potential predators have great difficulty in picking out a frogfish from the surrounding habitat unless they move. Frogfish are also able to suck in water and puff up their bodies, making them too large for most predators to swallow.

Threats
Frogfish are not sought after by fisherman and are not threatened by overfishing. Their greatest threats are loss of habitat & pollution.

Did you know?
Although they look slow and ungainly, a frogfish can attack in as little as 1/6000 of a second – the fastest movement in the animal kingdom.